Internationally, peplums are not a new trend. The Duchess of Cambridge has been seen spotted in peplum dresses and skirts more than a few times, and some high street brands cleverly made it part of their summer collection. On the Indian fashion week ramps, peplums have grown up.

Take a look at the peplums at Lakme Fashion Week Winter/Festive 2012: 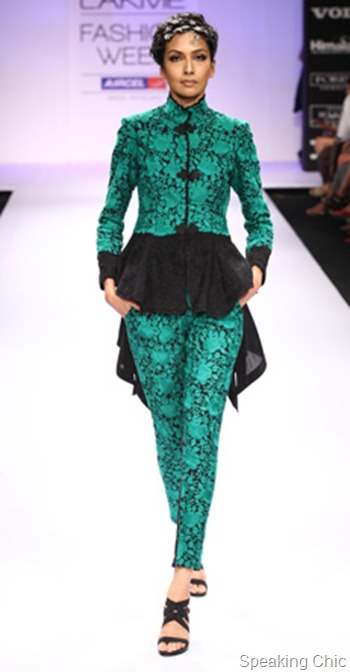 What’s your take on peplums?

As you ring in the new year, you’re ready to look like you’re in 2011. After all, 2010 will be so last decade. But if you’re stuck with past season party dresses you want to wear for the big bash on New Year’s eve, don’t lose hope just yet. Some trends are still pretty much out there, and  you won’t look outdated.

Trend 1: Military
Spring/Summer 2010 was hot on the militry trend. Khakis, epaulettes, camouflage prints ruled the ramps and streets. Choose to go all-out military with boots, or soften your look with a feminine accessory like a bow or rosette clutch.

Gown and shrug from Sailex NG.

Trend 3: Bodycon
Another oldish trend. If you’ve been working out hard in the gym, slip into a bodycon dress to flaunt your toned body.

Have you decided your party dress yet?

Lakme Fashion Week’s Gen Next show provides up-and-coming designers a platform to showcase their talent. The Gen Next concept was introduced in 2006 to encourage quality, innovation, creativity and commercial viability among the budding designers.

Today several Gen Next designers are successful and have a steadily growing fan following. To celebrate five years of the concept’s success, Lakme Fashion Week organised a show with 10 established designers who debuted at Gen Next few years ago.

Highlights of the show

Anuj Sharma played with the concept of 3D, using triangles edged necklines, cloth bubbles on the bodice, giant covered buttons, cones appeared on the bustier and 3D motifs on the neck. Highly unusual, but translatable into an interesting retail collection.

Kallol Dutta is known for offbeat prints, and I spotted a number of people at the show wearing his clothes. Calling this line “Black Humourist”, Kallol used black as a backdrop for his funky prints. One of his prints was (ahem!) a fork and a spoon. Later asked about the use of such symbols, he shrugged and replied, “I just like to use random, impertinent objects and use them on my clothes.” Good reply, and good thing it’s quickly becoming wearable and acceptable fashion.

Kunal Rawal’s five outfits were perhaps the most refreshing (and fun) of the lot. His male models told the story of karigars (workers), carrying tools of their trade, looking rustic, and one even taking off his shirt. (Woot!) There was also a canvas waistcoat, a kurta shirt, a sherwani and bundi combo and a sporty four flap pocket jacket with trousers. The colour palette was largely khaki-inspired, with brown and orange. Here’s Kunal with a model (note the satchel):

Nitin Bal Chauhan is in the wrong profession. His heart and soul is of a visual artist working with mixed media. For his Freedom! Freedom! line, he created skirts, jackets and dresses with the most unusual materials—newspaper-print coated paper, spools of thread and plastic basket weave, creating a stunning effect on the ramp. The inspiration, he said after the show, was from farmers who are forced to pick up weapons to make their living (the Naxalite story). He created these garments using materials from their daily life. Can’t wear them, but very poignant stuff.

Other designers at the show were:

Which Gen Next designers do you like? Tell us!

Sailex’s duality-themed collection portrayed the contradictory facets of a women’s mind. This collection of gowns and dressed (called “Fallen Angel”) portrayed the duality with fluid lines, rich fabrics, some bling, and military elements.

His colour palette was anything but subtle—black, tomato, magenta, navy and purple, accessorised with gold. He played with textures and embellishments, by mixing velvet and chiffon and using pleats, drapes and glittering external shoulder pads and epaulet to give his collection certain amount of edginess. He added texture to models’ hair as well, with crimped sections, hair flying lose, or pulled into a haphazard updo with strands all over the place.

Sailex says that the woman who wears his outfits is strong and daring, and the type “who could bash someone up”. For that to come through, we’d need a bit more edginess. Even so, I liked most of what I saw. His gowns could be a good investment for bold party girls.