Aamby Valley India Bridal Fashion Week Delhi 2013 drew to an end last week, so here’s a quick look at some “trends” I observed from the various shows. 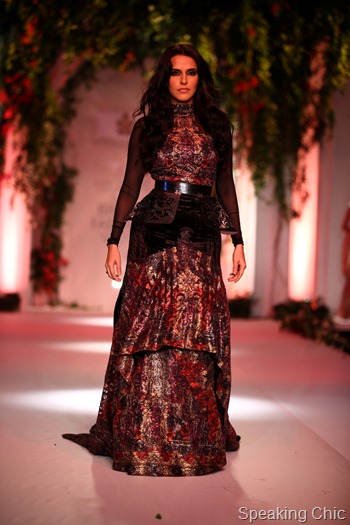 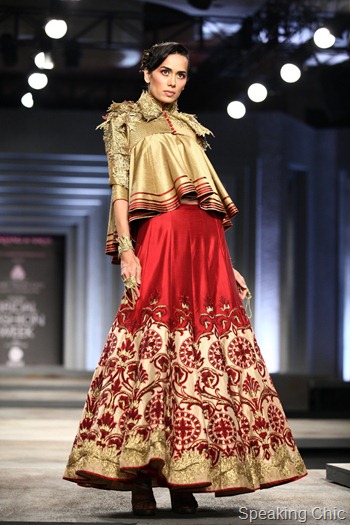 … While some designers look at the past
Mughal, Renaissance and Kotwara influences- the days of yore fascinate designers, brides and fashion-loving Indians in equal measure. (Below: Meera Muzaffar Ali, Ashima-Leena) 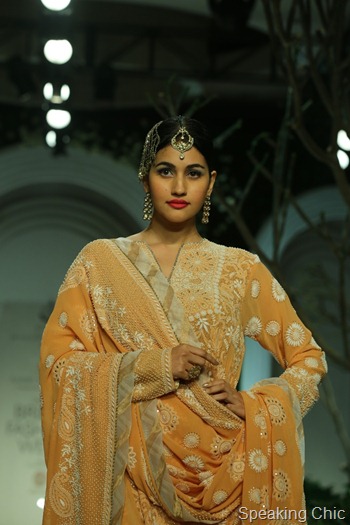 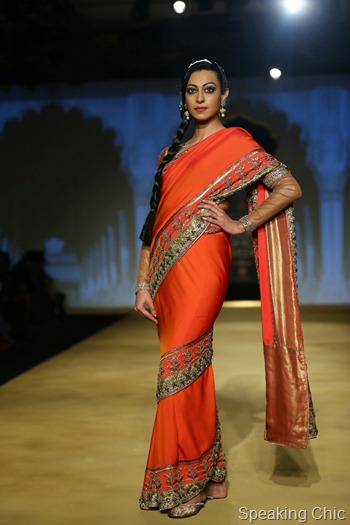 Hot colours for brides are oranges and nudes
Jewel tones like rich purple, bright blue and peacock green have almost disappeared from most designers’ colour palette, in favour of orange, coral and peach shades, with nude, ivory and beige. Must say that some shades of orange I saw on the ramp were delicious. 😉 (Below: Ashima-Leena; Tarun Tahiliani) 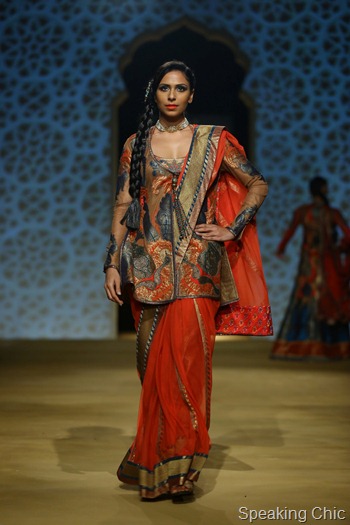 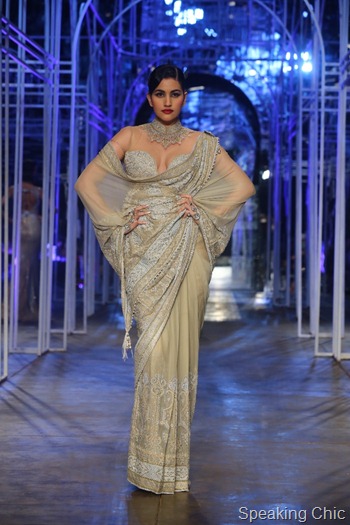 Gold is still the black of Indian bridal wear
Embellishments are golden… ’nuff said. Us Indians will always be obsessed with the yellow metal.  (Below: Sonam Kapoor for Rohit Bal; Suneet Varma) 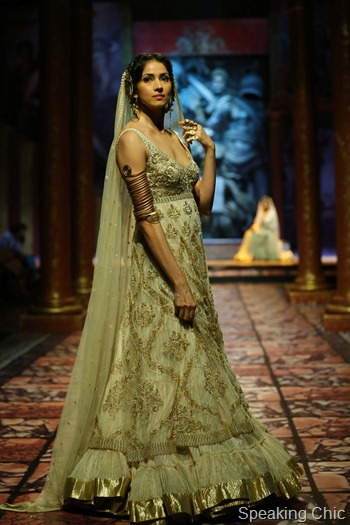 Fashion weeks will never be short of WTFashion moments
From Rina Dhaka’s overtly kitsch collection to some sort of headbands at Adarsh Gill, ramp shows will always have some seriously WTFashion styles. (Below: Adarsh Gill, Rina Dhaka) 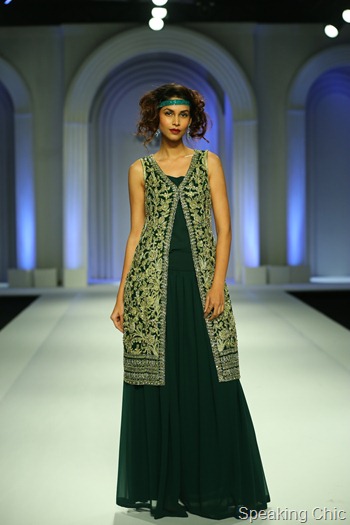 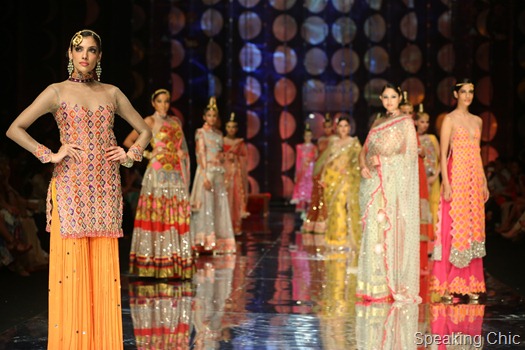 What did you think of the collections at Aamby Valley India Bridal Fashion Week?

My big day is barely four months away, and India Bridal Fashion Week Delhi 2013 came along at the right time. Looking at all the pictures from the week gave me a good idea of outfits I could try, some embellishment options I could explore, or hot colours for brides over the next few months.

Here’s my pick of the outfits I’d choose to wear for my wedding (and the related ceremonies). My top choices range from lehengas for the wedding ceremony to gowns for the sangeet. Which outfit is your favourite from these?

Ideal for my daytime mehendi party.

This outfit could easily be part of my trousseau.

For the sangeet or cocktail party.

For the wedding and reception.

Another option for the wedding ceremony.

It’s not often that a seemingly-reclusive fashion genius steps out of his workshop to share philosophy on work,  design and life. Last night, Sabyasachi Mukherjee had a heart-to-heart conversation with Boman Irani on Teachers’ Achievers’ Club (Star World). Take a look:

The designer, in his trademark white kurta-churidar and black waistcoat amazed me with his bluntness, sharp wit and unconventional views.  Some fun fashion-related tidbits from the show:

After Sabyasachi’s first collection, ace designer Rohit Bal complimented him, saying Sabyasachi was “the best designer ever”. Unfortunately, his second show got bad reviews and Sabyasachi made sure that didn’t happen again.
As we already know, Sabyasachi is a proponent of Indian textiles and handicrafts and has always said that Indian women look better in saris. He insists our traditions and past should be embraced, and more Indian women should wear traditional garments and weaves. I’m inspired, really. I’ve promised myself I will wear a sari on one day of Lakme Fashion Week.

During the interview Sabyasachi panned the West’s over-arching influence and approach to fashion. He said: “[I don’t like] the West’s patronising attitude just because they’ve mastered marketing and packaging.” That’s perhaps the most politically incorrect statement a designer could make.

Sabyasachi’s five-year plan is to make his label affordable for everyone in India. Can’t wait for that day!

He also hopes to direct a movie some day– and the costumes may not be designed by him.

The designer may be dressing Vidya Balan, Rani Mukherjee and Sridevi, but his mom doesn’t wear his saris. She says they’re unaffordable, especially “when there are other good saris available for Rs 800”.

Sabyasachi knows there are tonnes of fakes floating around, but he doesn’t mind that, as long as it “empowers karigars in some way.” Noble thought, no? 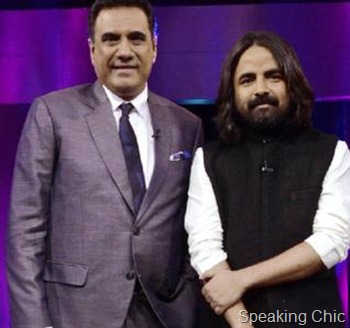 One word for this creative genius: R-E-S-P-E-C-T. 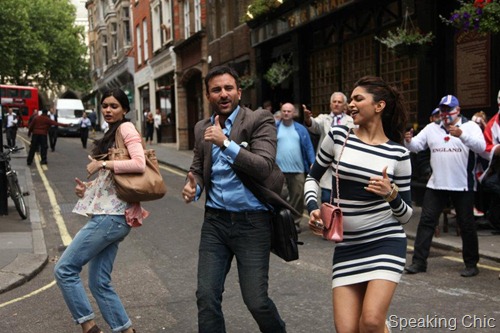 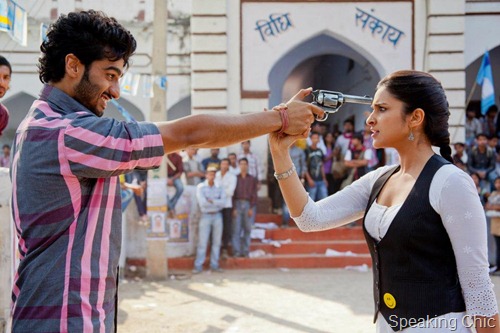 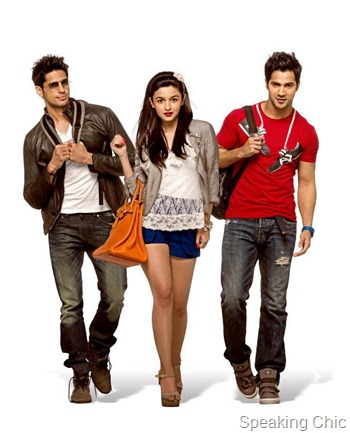 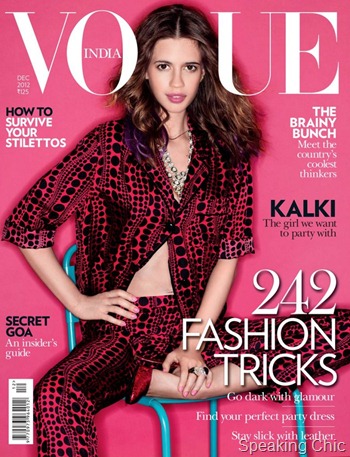 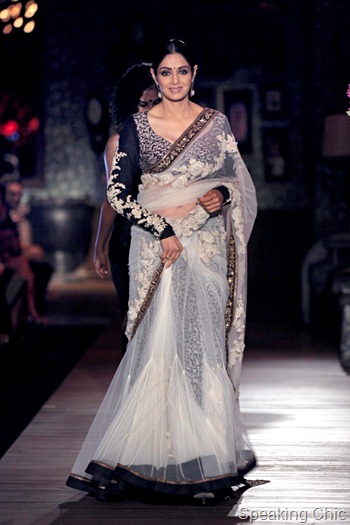 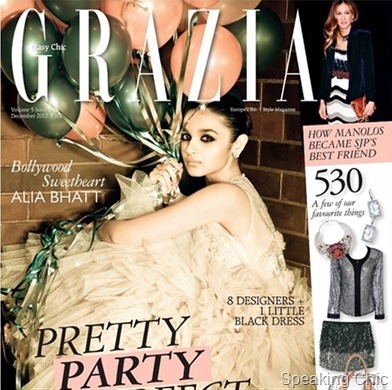 Lakme Fashion Week Summer/Resort 2012 drew to a close last night, with Rohit Bal presenting his collection in the lawns of Grand Hyatt, Mumbai. I loved the decor, enjoyed the ambience and was mesmerised by the entire presentation. There were live musicians, pristine white and off-white cut-out trees and a two-level structure! 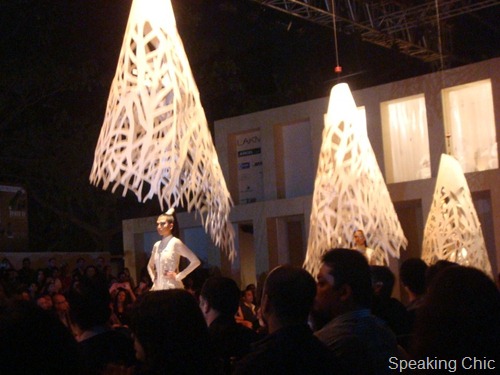 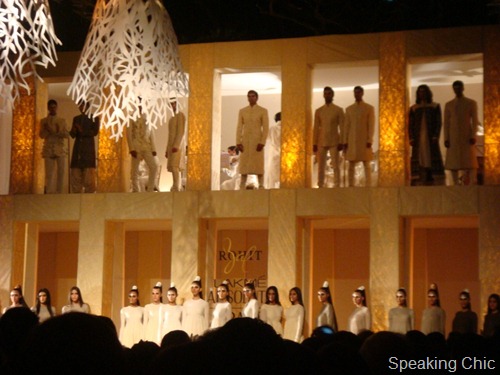 And here’s a video I shot during the show. Enjoy!

It’s the last day of Lakme Fashion Week Summer/Resort 2012! Saving the best for the last, here is what’s on my agenda today:

Malaga by Malini Agarwalla: Malaga—the accessories brand—has made quite a splash in the past few years, and her baubles on bags and shoes are everywhere now. Hoping she can pave the way for different styles!

Rocky Star: Designer Rocky S is making the most of his popularity with new lines and businesses. Today he kickstarts his new celebrity line “Rocky Star” with a collection that’s inspired by chandeliers. I’m expecting all sorts of embellishments, feminine flourishes, and Rocky’s signature colours like ivory, black, grey and nude.

Lakme Grand Finale by Rohit Bal: There’s plenty of buzz around Rohit Bal’s show tonight, and almost everyone I know wants to watch it at the fashion week venue. (Below: Rohit Bal at the off-site show, LFW W/F 2011) 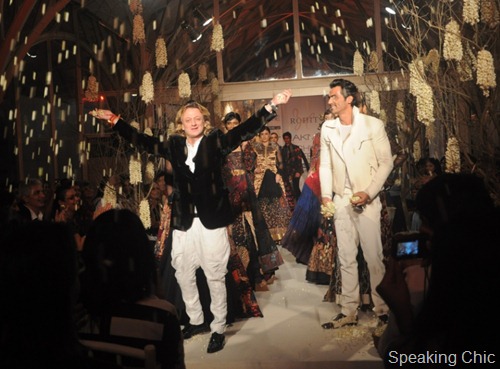 Also looking forward to: Archana Kochhar (for her prints). 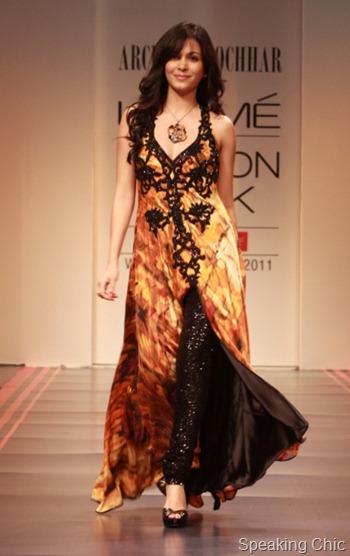 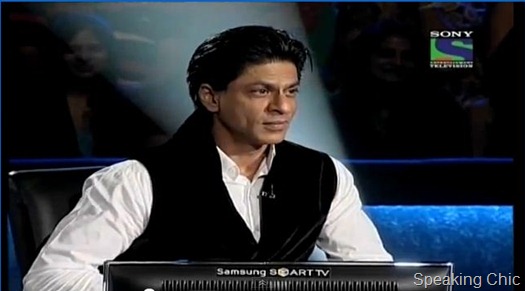 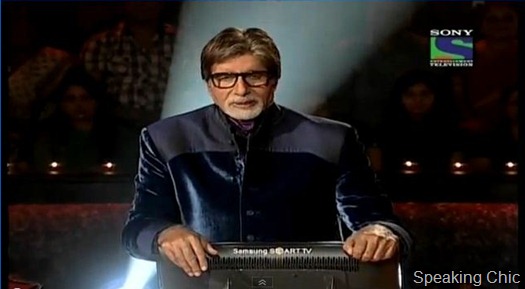 Some amazing designers: Rina Dhaka, JJ Valaya, Wendell Rodricks, Narendra Kumar Ahmed weren’t at the previous season of Lakme Fashion Week, so we’re hugely excited to see their winter/festive collections. And oh, there will be 87 designers in all at LFW W/F 2011!

Manish Malhotra’s finale show: The LFW folks leave no stone unturned in making their grand finales memorable shows, even though they start at least an hour late every season. This year Manish Malhotra will be the finale designer and Kareena Kapoor will walk the ramp. Manish’s collection will interpret Lakme’s upcoming makeup range Lakme Absolute. More chances to browse designer collections: The Source, the space where LFW designers exhibit their collections, will get bigger this season. Besides more designers, some will get the opportunity to have a preview of sorts during a specified time during LFW. The best thing is—anyone can visit The Source, you don’t need passes!

Bryanboy is here! Some of us lucky folks covering LFW might just bump into one of the most popular fashion bloggers in the world. Or as NYTimes says, “Internationally-loved fashion superblogger.” If you haven’t read Bryanboy’s blog yet, read it now!

PS—If you don’t have much-coveted passes to your favourite designer’s show, you can catch LFW live online at LFWTV.in.