After watching Deewar couple weeks ago for a writing workshop, I had a sudden urge to re-watch old Hindi films. And so, last evening, while the baby slept, I opened Prime Video and tapped on Deewana.

Anyway, even as I got lost in the endless string of songs and the villainy of Amrish Puri and the classic desi mom-ness of Sushma Seth, I couldn’t help but notice the distinct style differences between the 1990s and today.

So here’s a revisit to 1990s fashion from the Deewana lens.

Rishi Kapoor’s (Ravi in the film) costumes were a mixed (err.. confusing) bag of styles, like these:

Shah Rukh Khan’s clothes in Deewana were more interesting than Rishi Kapoor’s, but sadly, the designers fell short of a cohesive look. Most of his clothes made Shah Rukh Khan’s character Raja look seem older than his on-screen age. A young, wealthy brat would be in slightly flashier clothes, that would grab attention and exude confidence.

In his introductory song Koi Na Koi Chahiye, Shah Rukh Khan donned a brown leather jacket, and this became a defining on-screen look for him for many years (remember the black jacket in Dilwale Dulhania Le Jayenge?).

In the rest of the film, he wore oversized shirts with loose sleeves and high waisted jeans, often paired with a prominent belt and matching buckle. And oh, those dull colours—browns and greys. Eeeks.

In true Bollywood fashion, the dream song sequence had the most unusual costume choices. So, in the cornerstone song Aisi Deewangi Dekhi Nahi, Shah Rukh Khan wears the most outrageous ensembles. Think teal shirt with teal trousers, a fully-blue suit (without tie, thank god), and a black and white polka dotted cravat!

As for the hair, it was long-ish, as was the fashion those days, though I’m not sure I dig it.

Divya Bharti as Kajal donned a wide range of ensembles in the film. As a single girl smitten with singing sensation Ravi (Rishi Kapoor) she wore simple salwar suits and some skirts. As soon as she was married though, she became a wealthy family’s bahu, wearing mostly saris of rich fabrics and embroideries. I especially liked the green sari which she wore in a pivotal sequence just before the intermission.

But once injured Ravi tumbled down a waterfall, Kajal had to adopt a widow’s attire. The white-wearing widow is not a custom I agree with, though it’s still practised in some part of the country. Depriving women of clothing (and other choices) is just another form of patriarchal oppression.

But her wardrobe comes to life again, after she marries Raja. So in the rest of the film you will see her in puffed sleeves tops, blouses and kurtas. Plus, lots of makeup and jewellery.

Her go-to accessories seem to be big gold earrings and gold kitten heels.

As for makeup, Divya Bharti’s look featured carefully coordinated lip colours and bindis with wavy hair, reminiscent of a perm. The biggest surprise though were her French braids. They were super cute, and reminded me of my childhood, when I would wonder how girls made those complicated hair style (there was no YouTube then).

But her costumes sparkle in the song sequences, especially when she’s suddenly in “western” clothes.  Her clothes were carefully selected to suit her petite frame, and she carried them off with great confidence and flair.

There were bold colours like orange and smart silhouettes like tight, short skirts and glam off-the-shoulder blouses. Those were major drool moments for me!

What to Expect- Humour and Sports

Remember the jogging suits from the 1980s? I owned a couple of them, and this season they’re getting a 21st century update with a touch of humour, thanks to Lacoste Creative Director Felipe Oliveira Baptista has updated the brand’s eighties’ jogging suits. 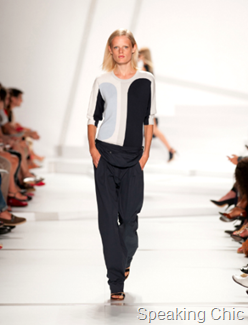 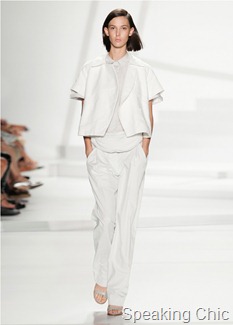 So where’s the humour? For starters, you can’t miss the fanny packs he’s added (quite tongue-in-cheek), and the matchy-matchy shirts and pants (thankfully not the oversized fits).

Then there’s the capsule collection of polo shirts for men and women that will feature the brand’s iconic elements like tennis balls, rackets and courts—all very Wimbledon-y! You’d wish you played tennis…

The element of fun

There’s a little bit of fun in the entire collection, like the graphic and geometric prints in yellow, orange and other spring colours; and mixing of navy, red, electric blue and dark orange with lighter tones for contrasts. 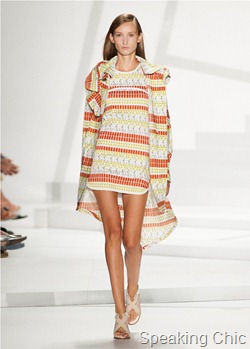 Spring/ Summer 2013 is largely about neons and bright colours, so the Lacoste idea of pure white separates with pearly greys, pale yellows and light blues would be a sight for seeing-too-much-bright eyes. And the easy silhouettes indicate comfortable luxury that will hopefully make our summer a more relaxed one.