Deepika Padukone can wear almost anything and look pretty in it. In Yeh Jawaani Hai Deewani her character Naina wears a whole variety of clothes and looks great in all of them. Unfortunately,  Deepika’s looks in the movie are as stereotyped and predictable as the storyline, sometimes inappropriate and sometimes just bizarre. I’m not too impressed with costume designer Manish Malhotra’s styling for this movie.

Either way, if you want to adopt Deepika Padukone’s looks, here’s a simple one-step guide to the three key looks she dons in the movie. 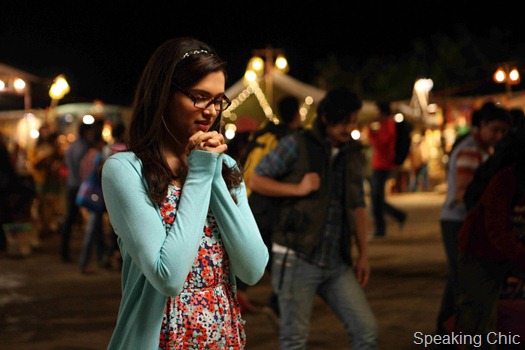 The plain Jane Deepika wears squarish geeky glasses that indicate her studiousness, with simple printed dresses covered up with a light jacket or cardigan. Her straight hair is pulled back into a ponytail or held back with a hair band. BTW, on cold nights, while camping in the Himachal outdoors, Deepika looks surprisingly cozy in knee length dresses! 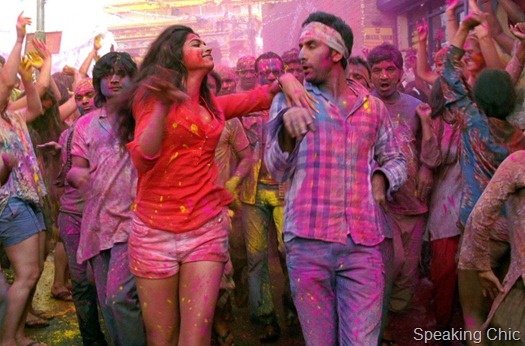 Deepika Padukone’s transformation from geeky girl to sexy lass was completed in the most predictable way– by getting drunk, swapping the spectacles for contact lenses, and ditching the comfortable outfits for tiny shorts and prancing around during Holi (when most Indian women want to stay indoors). 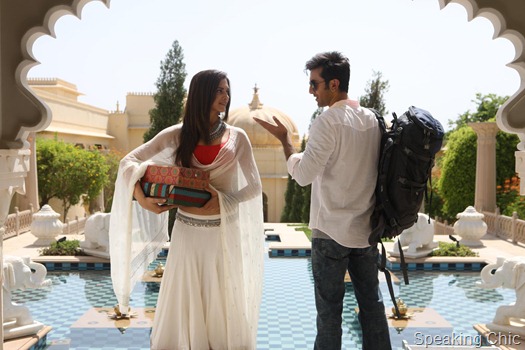 Once the transformation was complete, we didn’t get to see much of Deepika until a grand wedding in Udaipur. At the wedding, Deepika is pretty much the centre of attention with tiny blouses and low waist lehengas. With her low neck kurtas that are barely concealed by a dupatta, Naina is ultra feminine and desi sexy.

Which Yeh Jawaani Hai Deewani look do you want to try?

Barfi! is not a fashionable film, though it’s a fun watch. There is nothing special about the clothes, since the focus is on the characters. Gorgeous clothes would draw attention away from the non-verbal gestures and expressions in this largely silent film, in which a lot of emphasis is on body language, interaction among characters and the setting.

The movie is set in the 1970s and you would expect to see bell bottoms, polka dots and flashy prints and colours. But you won’t spot too many of these in the movie, because Darjeeling is far away from the frenzy of the seventies.

As a chauffeur’s son, Barfi wears the sweaters and shirts a small-town boy would be expected to wear. Costume designer Aki Narula has paid careful attention to define the character- while Barfi’s clothes are not fashion-forward, he’s a real charmer and a guy like him would be expected to pay some attention to his appearance. Hence you notice the neat look and careful layering. The clothes look neither too fresh nor too worn out. 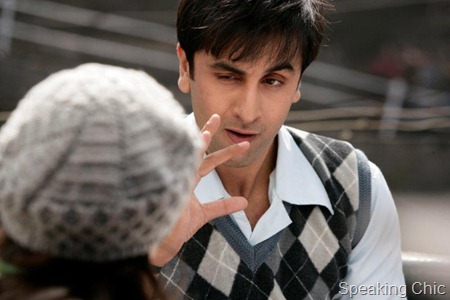 Patterned and knitted sweaters and cardigans (argyle and plaid)

Worn out jackets worn over shirts and cardigans. Ranbir wore a similar jacket on Indian Idol, and I can take a safe guess that it’s from Diesel. 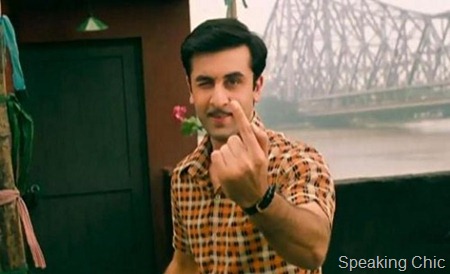 As a fresh college graduate, Shruti (Ileana) dresses casually, wearing jeans, turtlenecks, sweaters and skirts, without flashing skin. Her key accessories at this period are hoop earrings- in dozens of sizes, colours and styles! 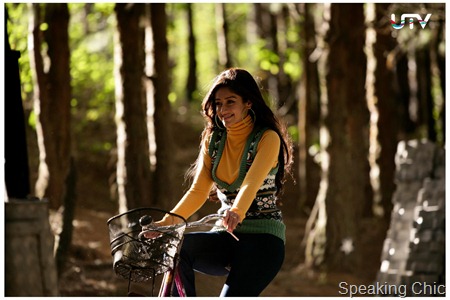 As a married woman, Shefalina GUpta has chosen Dhaka saris for Shruti in earthy colours and tiny prints. Her look is reportedly inspired by Jaya Bachchan in Mili and Guddi. 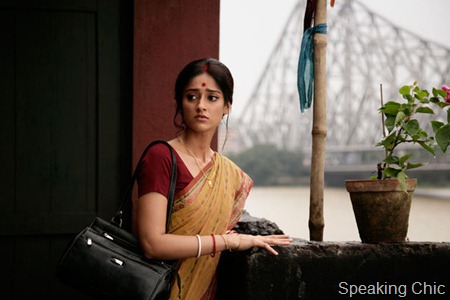 Playing an autistic character, Priyanka Chopra underwent a magical transformation and skipped her usual glamourous avatar. Hats off to the team behind her Barfi look for the cropped unruly curls and no-makeup look. 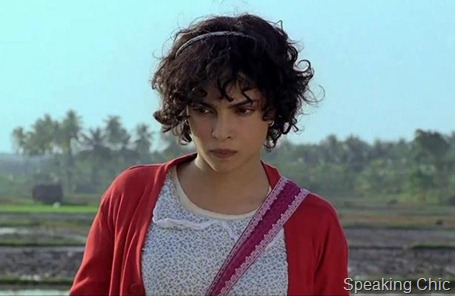 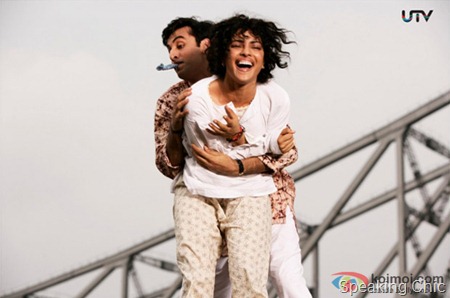 At one point in the story, Jhilmil develops a childish fascination with sensuality as she tries to ape Shruti’s sari, draping a bedsheet around her, looking very awkward but very satisfied with her achievement. That was one of the super sweet moments in the film.

Couple days ago, I de-coded Ranbir Kapoor’s look in upcoming movie Rockstar, as envisioned and designed by Aki Narula. Today I’ve taken the Rockstar look a step further. Drawing inspiration from Jordan (Ranbir’s character in the movie), here’s how you can get the Rockstar look. The best part is—both guys and gals can get steal from Rockstar, as long as they got the grunge attitude. 🙂 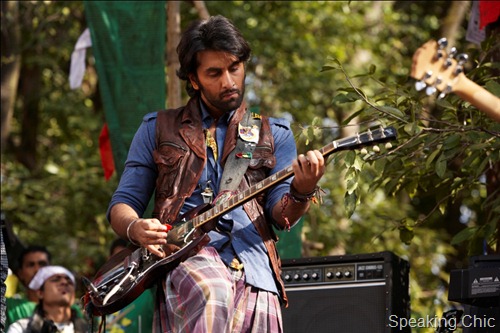 Below: Jacket from Zara, Probase Cargos (available on Myntra.com) 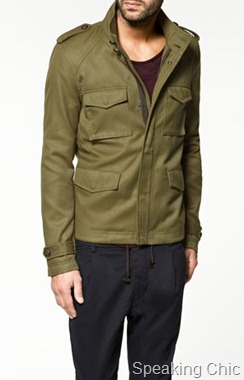 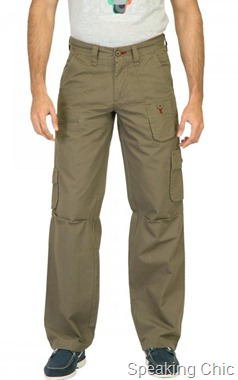 In the mood to have some fun as a rockstar? You could personalise your clothes by adding your own touch to a jacket or waistcoat. Some suggestions:

Pin some fun badges or paste some stickers on the jacket. They could be of your favourite rock band, sports team or just have some fun quote. An easy alternative is a magnet (use another magnet to hold it in place or attach it with glue).

Below: Badges from FC Barcelona, stickers from Manchester United 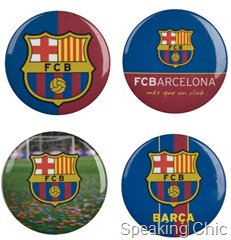 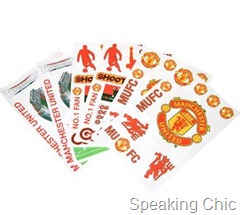 Add feathers and tassles: You could “borrow” tassles from your living room cushion or make your own tassle with wool or thread. Here’s a short and sweet video that shows you the easy way to make a tassle.

Below: Boot keychain (available on ebay.in), Clip bookmarks from Quirkoshop.com 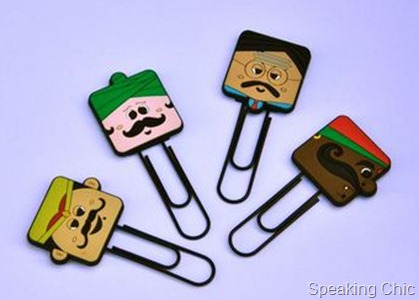 Draw: Sketch a peace sign on the jacket with a thick marker or felt pen. Or you could paint or create a picture on Photoshop and stick it on cardboard, then attach it to your jacket.

Some more crazy tips to look like rockstar Ranbir: 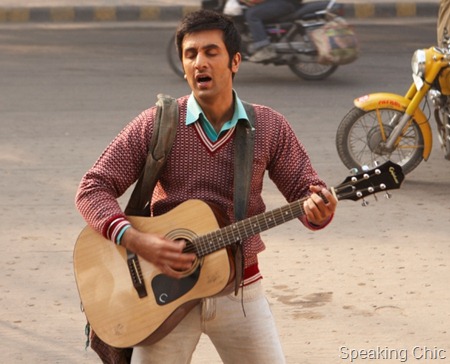 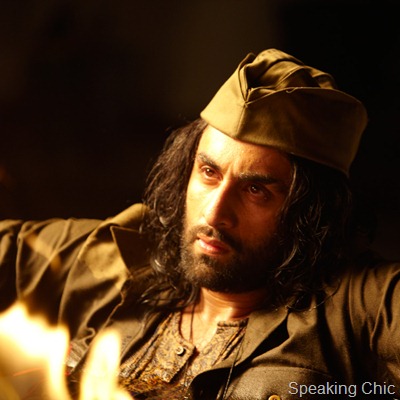 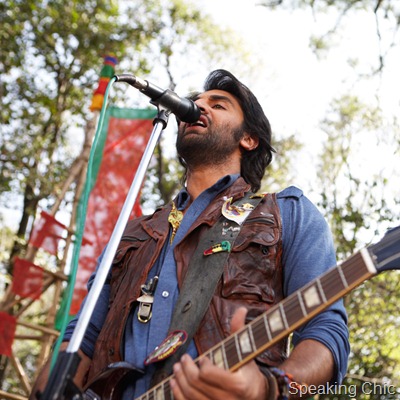