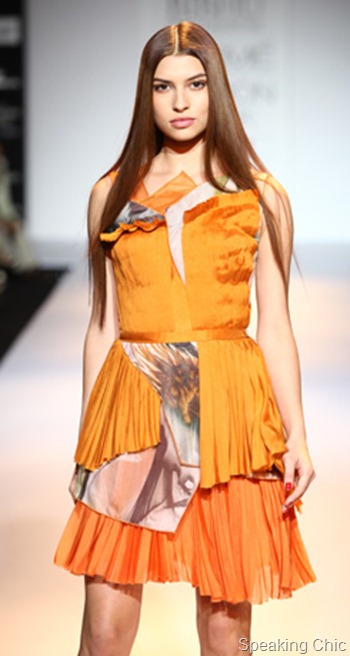 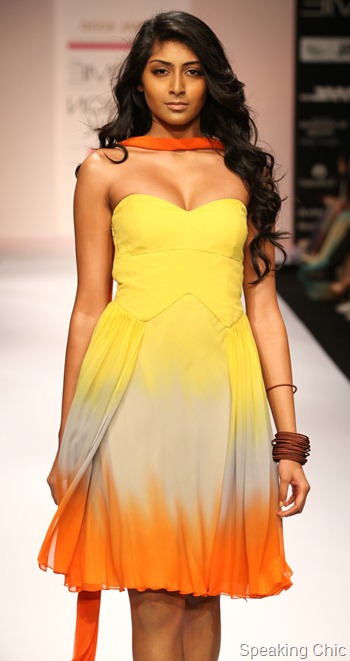 Abstractionist art seeped into fashion with deep jewel tones, neutrals and pure whites. What I liked most was the use of flowing silhouettes with strong angles. 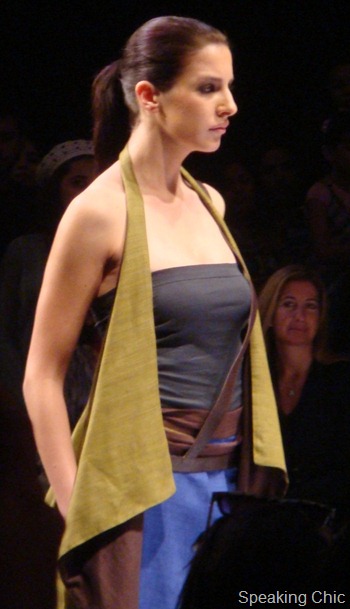 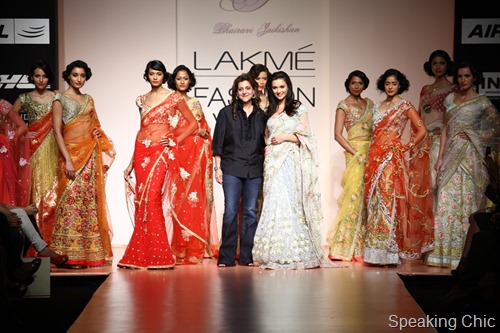 Accessories of the day

It was a day of accessories—they stood out in almost every show. So more space for the accessories today.

The sling bags were by AKA Bespoke. Wear them everywhere! 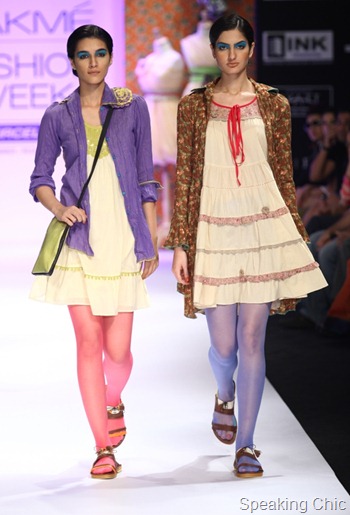 Bags and jewellery, liked the use of spikes and semi precious stones in eye-popping colours. Wear the neck pieces with a white shirt and jeans.

There’s not much to say about Suhani Pittie, except that I absolutely love her accessories. This time, delicate leaves, entwining vines, roses, and the hint of a graceful swan’s wing, the elegant peacock, the hornbill’s beak and the beauty of the spiral rivet were the motifs. 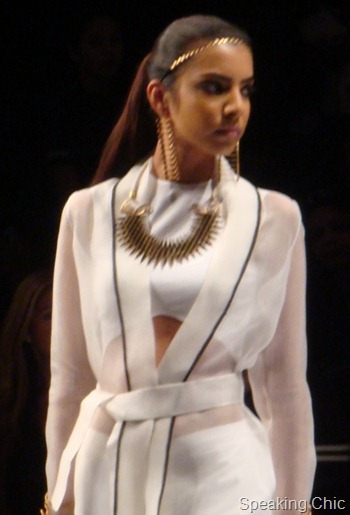 Super cute! And you can wear them the entire season… with everything.

Beauty looks of the day

Blue eyeshadow over the lid and the brow bone at Mineral by Priyadarshini Rao. 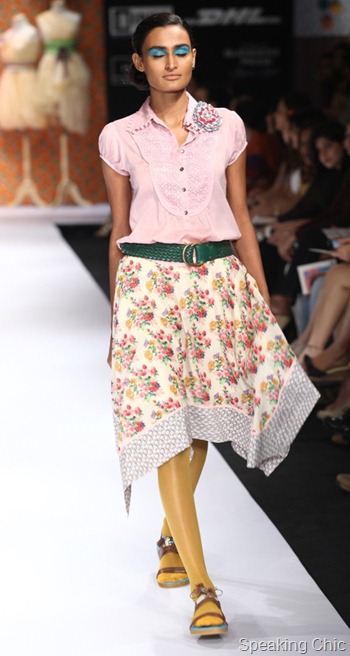 Let the picture below say a thousand words! 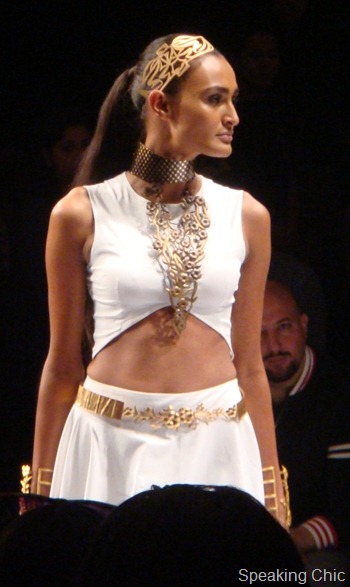 I’m ready for treated denim. Bring it on! 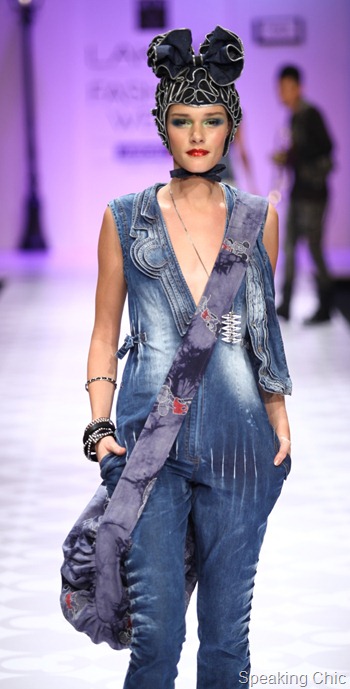 Set of the day

The cafe for Nitin Bal Chauhan at Disney Couture. 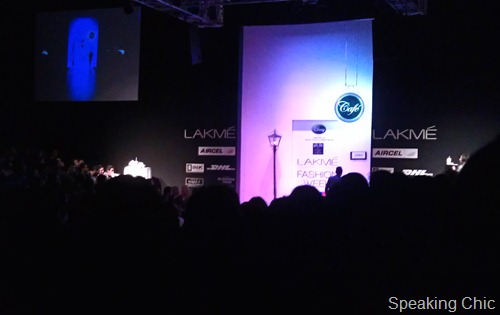 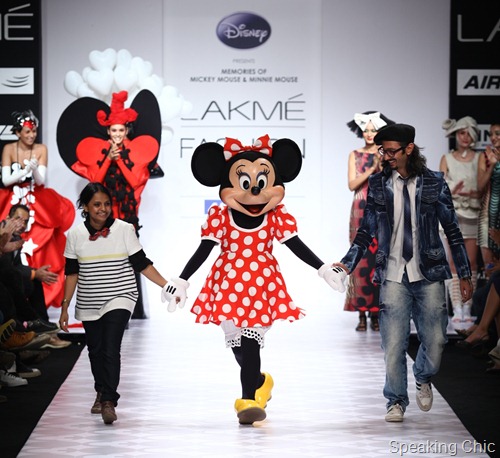 Customary Bollywood appearance of the day 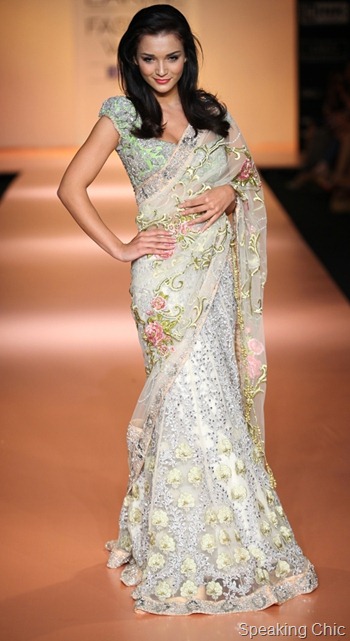 Day 2 of Lakme Fashion Week Summer/Resort 2012 is going to be super fun, because the shows and themes have me intrigued!

I always enjoy her jewellery, because she works with a range of materials from metal to stones, and her treatment and textures are unique. 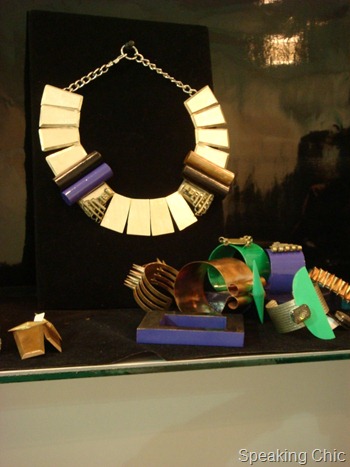 Bhairavi is among the handful of Indian wear designers who usually tends to not go OTT. All the more reason to catch her show.

On Day 2 of Lakme Fashion Week Winter/Festive 2011, DHL presented a trio of designers representing the future of fashion—Nachiket Barve, Little Shilpa and Swapnil Shinde. While all three designers are a few seasons old, their approach was fresh as they interpreted the brand’s theme—speed—in in their own personal ways.

Nachiket Barve
Seeking inspiration from the the fast-changing colours of a breath-taking sunset (The Golden Hour), Nachiket Barve used pink, golden, purple, and red hues in his garments and accessories. Playing on the ombré effect, the designer created saris, tunics, kurtas and dresses in his signature fluid style. Sequins, polki detailing, cutwork and applique were expertly used to create timeless global fashion wear. We also liked the matching neckpieces and clutches.

Little Shilpa
Shilpa Chavan’s interpretation of speed was flight and the urban landscape—birds, wings, aeroplanes and skyscrapers. Her models walked the ramp encased in sky and clouds boxes made from packaging material, while the headgear was made with pleated ikat fabrics and feathers that framed the face. Aviator glasses were used as hair bands and glass pieces symbolised eflection.

Swapnil Shinde
Swapnil Shinde’s LFW W/F 2011 collection was based on sound waves, hence named “Speed of Sound”. Swapnil created ripple-inspired shapes with folds, pleats and drapes in fabrics chiffon, taffeta, organza, and crepe, along with materials like acrylic, PVC and leather. PVC rolls and tubes were the most cleverly-used embellishment (for lack of a better word), seen on the bodice, waist and shoulders of dresses and gowns. The soft drapes falling across the front of the garment in waves added to an elegant, high-fashion look.

Some of the top designers to showcase their collection on the LFW W/F 2011 ramp:

And some of the other leading fashion designers include:

Which designer’s collection are you looking forward to at Lakme Fashion Week Winter/Festive 2011?

Some of the top designers to showcase their collection on the LFW W/F 2011 ramp:

And some of the other leading fashion designers include:

Which designer’s collection are you looking forward to at Lakme Fashion Week Winter/Festive 2011?

On Lakme Fashion Week Summer/Resort 2011’s second day (March 12), the ramp was on fire (well, almost). The clothes sizzled, and so did the models. Our roundup of Day 2:

If it’s summer, there’s got to be swimwear. And if it’s swimwear, the ramp’s gonna heat up. At Shivan-Narresh, models strode out confidently in sexy swimsuits. And Anand Kabra played peek-a-boo with sheer coverups over bikinis at the Sleek: The New Mystique show.

Also at Anand Kabra was the sensuous look with red, black and wine silk draped tunics. And on the boldness front, spunky designer Masaba Gupta led the way with giant-sized dots and rolled-up fabric as headgear.

At Lakme Fashion Week Summer/Resort 2011, Little Shilpa presented a fashion film along with her collection Fleurs du Mal (both her creations). With dim lighting, smudged eyes, hints of tears and seven intricate headpieces and neckpieces, Shilpa’s show was spellbinding to say the least.

Meanwhile Manish Malhotra created a magical, royal and rustic atmosphere with coloured lamps and royalty-inspired decor. Take a look at the set:

Something nice for the guys

The Energie show was all-male, with some great clothes for the guys: trendy, preppy sportswear, casual chic and relaxed day wear. At Manish Malhotra later that evening, the ace Bollywood designer presented some amazing chikankari and Kashmiri embroidery sherwanis for men. As an added bonus, this also meant that two back-to-back shows had super-hot male models walking the ramp, including Kunal Kapoor. WOOt!

Below: Energie and Manish Malhotra

Anand Kabra’s show was about clothes and hair, of course. Anand Kabra’s Magnetic was accompanied by a unique hair style:  an asymmetrical side sweep frontal fringe, with a half inverted French braid. Earlier in the day, we spotted wonderful and wearable hair accessories at Pam & Arch London worn on the side. The accessories were shaped like flowers, birds and fans.

(Below: Anand Kabra’s Magnetic look from the front and the back, Pam & Arch London.)

Colours we want to see in a waffle cone

Yummmm… ice cream on the the ramp! Jatin Varma’s collection was titled Gelato which was enough to make our mouths water. His designs were marked by sorbet colours (melon pink, blue, white and dollops of yellow), light fabrics and delightful drapes on minis and gowns. Barely couple of hours later, Shivan-Narresh’s collection sought inspiration from Vanilla— so lots of white blocked cleverly with splashes of blue, orange and even black. I’m tempted to break my diet already.

Little Shilpa’s collection at Lakme Fashion Week Winter/Festive 2010 was a surrealistic journey to a utopian land, with the use of soft colours like baby pinks, whites, and fluid lines. Shilpa twisted see-through fabrics like net and lace into headgear  and body gear to reflect her land of “honesty and transparency”. The shapes that arose from her craft were petals, spirals, peaks and towers. Instead of using nude fabrics to drape the models, Shilpa used exaggerated plastic bustiers and skirts, providing a perfect contrast to the soft fabrics.

As Shilpa said after the show, smaller version of these creations are available for retail. I’m sure those would be just as interesting.