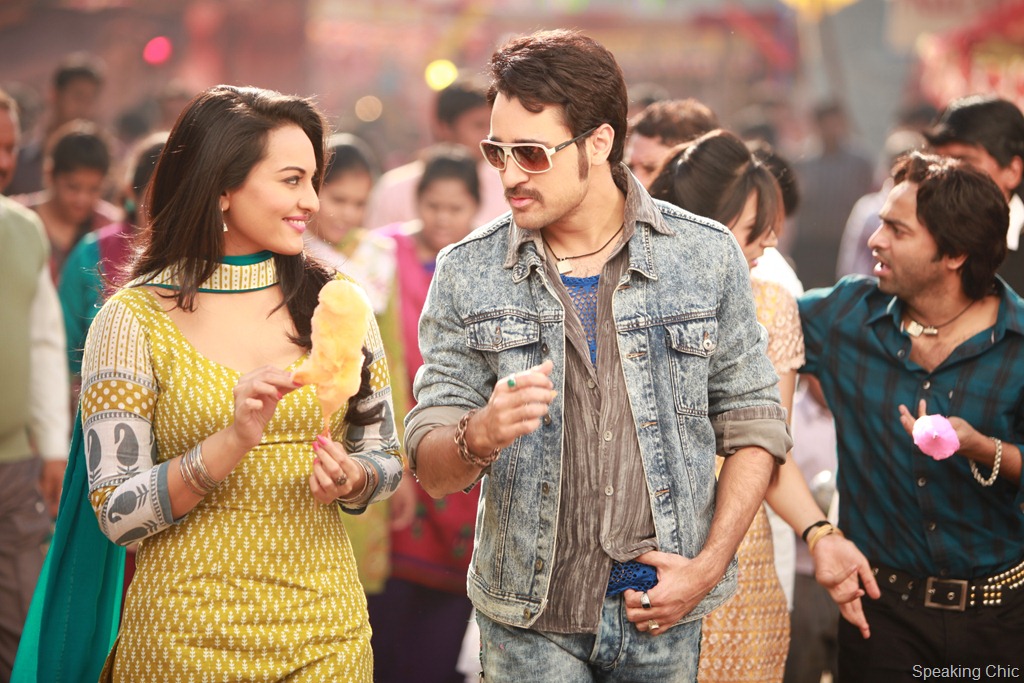 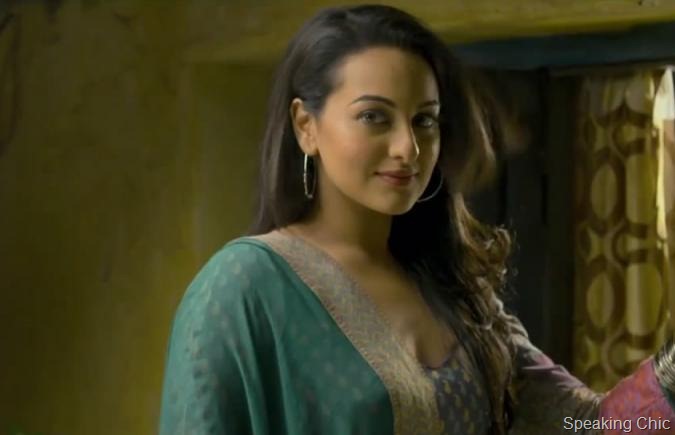 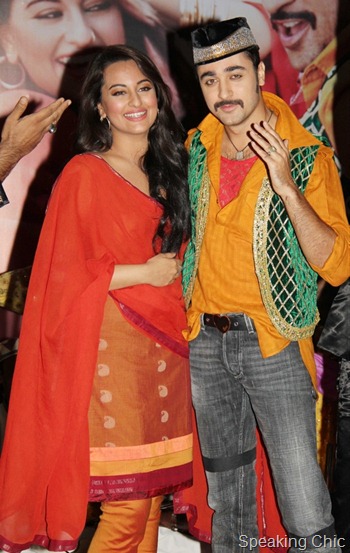 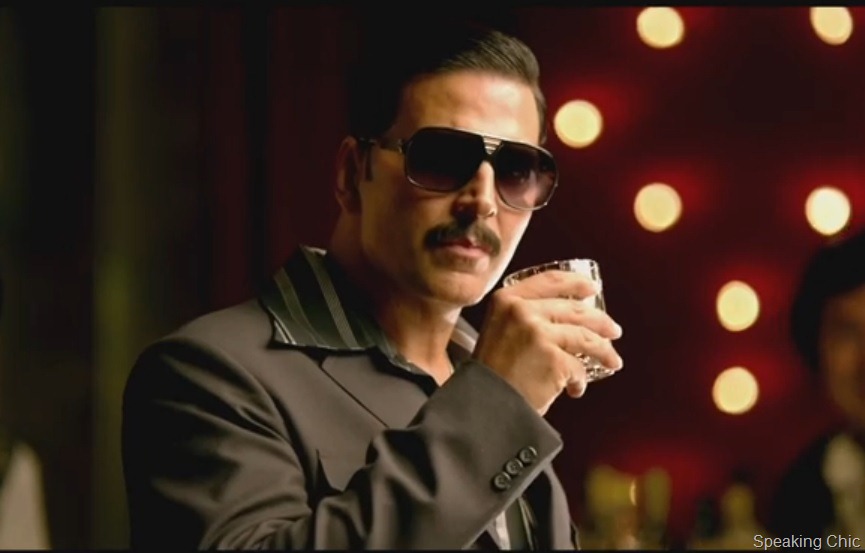 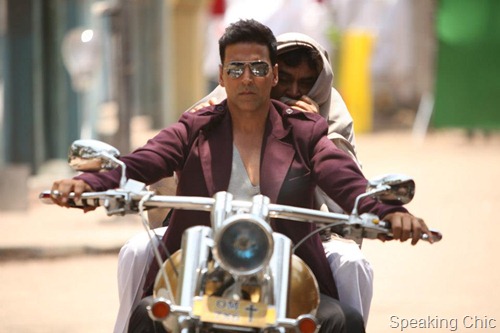 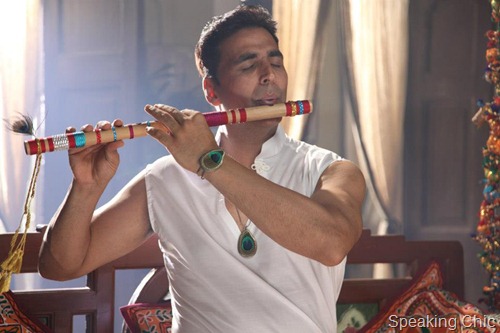 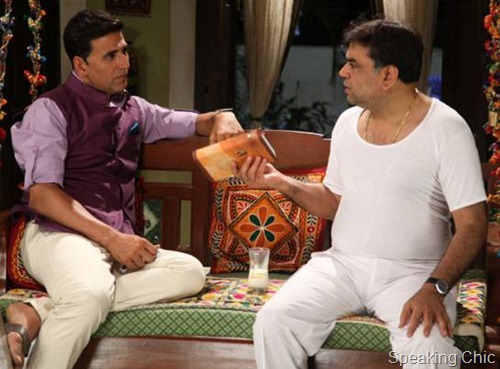 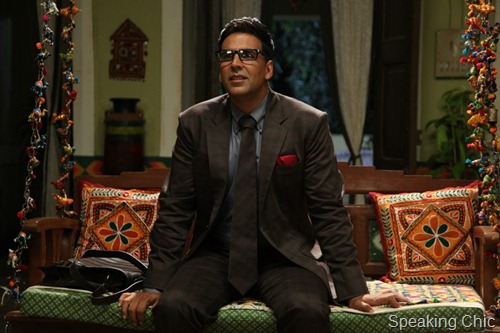 Instead, our style focus shifts to the Kahlon family “bimbettes”: Jesmeet and Anaida.

The two have done played with trends like colour mixing and funky layering, and are sporting trendy accessories like chic berets and long necklaces. Of course, credit is also due to Patiala House’s costume designer Jaimal O’Dedra.

Meanwhile, Anushka Sharma doesn’t seem to be making much of an impact in the Patiala House promos—neither in the fashion department nor otherwise. Here’s a glimpse of Anushka in the popular song Laung da Lashkara.

Anushka is wearing a tight choli and low-waist lehenga. Nothing new in that, but I liked the nose-ring. Is it coming back already?

While Sheela ki Jawani (aka Sheila ki Jawani) rocks the charts, Katrina Kaif seems to be rocking on the Bollywood fashion front with a confusing outfit in the chartbusting song from Tees Maar Khan. So what on earth is that pink thing? Is it a sari, is it a skirt, or is it a cutoff lehenga?

It’s none of them, folks. It’s what the fashion world is calling a half-sari. What it comprises: a knee-length underskirt/ petticoat (or whatever fancy-shmancy name you want to give it), and a “sari” that’s not the sari’s length, but shorter and not even the same width as the traditional sari. It looks like something’s missing. Length, fabric…and a wearable garment.

We asked some people about their opinion on the half-sari concept. Some of the spontaneous reactions:

“It’s neither this nor that! Awful!”

“It would look stupid off-screen.”

“I wouldn’t want to wear that, but it might just become a hot trend.”

It’s worth noting that Tees Maar Khan costume designer is Aki Narula, and not Manish Malhotra, which is a refreshing change.

Akshay Kumar and Aishwarya Rai Bachchan-starrer Action Replayy hits theatres today. The movie is based in the 1970s, and the film’s designer Manish Malhotra (who else?) has pulled all stops to give each cast member an authentic 1970s look.

But we remember the seventies, don’t we? How many of you think the clothes in the movie resemble those of the 1970s? See the pictures and vote!

Meanwhile, check out what Akshay Kumar wore to Lakme Fashion Week in September to promote his film. We understand you wanted to look like you’re from the 1970s, but what’s with the polo neck on a hot day? And check out Rannvijay’s yellow shirt with black waistcoat. Doesn’t suit him at all.

Barely a week after Amitabh Bachchan’s return to the small screen, Akshay Kumar made his small-screen comeback with MasterChef India (not with the Rs 17 lakh sherwani though).

Akshay Kumar isn’t really known for his wardrobe or style statement, but this time he does try to be cool. He’s wearing open-necked shirts with suits, no tie. And our ever-sharp eyes fell on his shirts: they were floral prints.

Not only do they completely conflict with the tough guy-turned-chef look, they look kinda funny. We’d not advise any guy to wear such shirts.

Our advice to Akshay: Cover up your floral shirt with an apron, or a chef’s jacket. Better still, don’t wear a shirt, just an apron. Guaranteed to get MasterChef India TRPs soaring. 😉

What do you think of Akshay Kumar’s wardrobe in MasterChef India? Tell us!

While shooting for Master Chef India in Udaipur, Akshay Kumar donned this diamond- and pearl- studded sherwani by well-known designer Abu Jani. The outfit was selected by his fashionable wife Twinkle Khanna, who no doubt wanted Akshay to look like royalty when he met the king of Udaipur, Sriji Arvind Mewar during the shoot. (The episode was shot in his residential palace).

Here’s Akshay with the king:

Must say we’re dazzled by the sherwani and the crazy price tag!

What do you think of this special sherwani? Tell us!