I’m happy you haven’t bowed down to the pressure of losing your post-pregnancy weight immediately after birth. 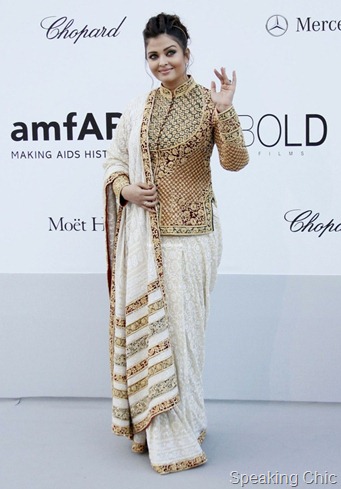 So while you can’t carry off a body-hugging evening gown (or more importantly, the snobbish designers won’t have samples in your size), at least choose an outfit that’s stylish and flatters you.

The gold work on this Abu Jani-Sandeep Khosla outfit is a bit too jarring for me and the genteel folk at Cannes. You could have done with a lighter blouse  for instance.

Or how about trying on a looser silhouette- there are so many flattering designer dresses for heavier and curvier women. The A-line is always flattering.

Also, how can you wear an Indian  outfit and leave your ears bare? Earrings are the one accessory that pull an Indian ensemble together.

BTW, the makeup is gorgeous! Loved the eyes.

What do you think of Aishwarya Rai Bachchan’s ensemble at Cannes 2012?

Bbuddah Hoga Terra Baap releases in a fortnight, and Amitabh Bachchan’s first look from the movie is out. Surprise, surprise! The new angry young(?) man dons a pop-coloured look in the movie. The initial posters reveal Mr Bachchan  in colours made popular by Govinda—green, yellow, blue!

Styled by Leepakshi Ellawadi, Amitabh Bachchan is sporting brightly-tinted sunglasses, and some very unexpected combinations of garments. Though we have reserved our verdict on this look till we see the movie, we’re happy to say that Mr Bachchan is willing to experiment with hatke looks despite his umm…. seniority.

What do you think of Big B’s fashion choice in Bbuddah hoga terra baap?

Aishwarya Rai-Bachchan in and as Heroine

Meanwhile, daughter-in-law Aishwarya Rai-Bachchan appeared in a purportedly leaked poster of Heroine, revealing… not much. All you see are her grey eyes and brownish hair parted in the middle.

Rumour has it that the picture in the poster (designed like a film rag cover) is an old picture of the actor. But you never know.

Meanwhile, another picture is circulating with red-lipped Aishwarya-Rai Bachchan’s bangs gracefully sweeping across her forehead—not sure where that image came from, but we think it’s popped up just to confuse us!

What do you think of the two distinct looks of Aishwarya Rai-Bachchan in Heroine (assuming they’re for real)?

Here’s our fashion wishlist and not-wish-list for 2011. What’s yours?

As we bid goodbye to 2010, here’s a quick recap of the fashion scene in India and overseas. Kicking off this fashion trends!

Even as the world sought retro inspiration, very few people (and movies) captured the essence of the 1970s without going OTT. One of the few Bollywood hits Once upon a time in Mumbaai got the decade just perfect, right down to Ajay Devgn;s moustache and white-clothes obsession. And we’ve already mentioned how hot Randeep Hooda looked in Ray-Bans.

At the risk of starting another debate, we have to say that we liked Aishwarya Rai Bachchan’s clothes in Guzaarish though they seemed completely out of character.

Every self-confessed shopaholic/ fashionista in India (or at least in Mumbai and Delhi) flocked to Zara when it opened two stores in July. A worthy competitor to Mango (another Spanish fashion brand), Zara quickly became a must-visit shopping destination for visitors to the two cities. My relatives from Amritsar wanted to visit Zara, so did my (not-so-fashionable) boss (sincere apologies in advance!). We were excited enough to take some spy shots there (see this initial Zara review of the Mumbai store).

In the latter half of the year, Delhiites got lucky when a huge Forever 21 store opened at Ambience mall (Vasant Kunj). I briefly visited the much-hyped store in Delhi recently, and I must say I was impressed with the sheer size of the collection, and most of the clothes weren’t too bad either.

And then there was Diesel and plenty others joining the fashion party. Looking forward to more high street brands coming to India in 2011. Fingers crossed!

Internationally, well-known celebs bagged a number of ad campaigns: from Madonna for Dolce & Gabbana to Julianne Moore (wearing almost nothing) for Bvlgari. Even as the latter ad was banned in Venice, Madonna’s portrayal of a housewife told an enchanting story. Lovely!

On the Indian advertising front, the Levi’s Curve ID TV ad disappointed. A LOT. The Curve ID concept is great (you choose jeans by your body shape rather than size), but the most of the ad shots were focussed on the girls’ umm… behinds. Seemed almost voyeuristic. Great track, though.

Shot in Rome, it’s a truly international ad, with brand ambassadors of three very different backgrounds (and markets) brought together to endorse the DolceVita line of Longines watches.

This line of watches is inspired by the Italian life and the Italians’ refined sense of style. (Dolce Vita literally means ‘the sweet life’), which could explain the choice of location for this TV ad.

In the advertisement, Aishwarya Rai Bachchan and Kate Winslet are wearing black dresses in classic silhouettes, while Chi Ling Lin has worn a beige dress. The three women try to escape the paparazzi separately to later meet in the town for a girls’ day out.

Interesting point to note: Aishwarya Rai Bachchan has the most screen time in this 35-second TV spot (or maybe the ad had different scripts for different audiences, though that’s quite unlikely). Which means they’ve got big plans for India. Hmm… (Though Aishwarya Rai Bachchan has been Longines ambassador for a while now, this kind of TV spot, with international stars, is among the first for Aishwarya since she joined Longines.)

In our earlier posts, we explained Aishwarya Rai Bachchan’s Guzaarish wardrobe and deconstructed the Guzaarish makeup look. After a closer look on the silver screen, our off-the-cuff reactions:

Speaking Chic Verdict: Lovely clothes, but let’s stay in character, shall we?

Speaking Chic breaks down Aishwarya Rai Bachchan’s makeup and hair in Guzaarish for you. Most of the makeup is bang on trend this season, so do try this at home. (Not recommended for nurses and most working environments.)

Bold and full lips: The makeup artist defined Aishwarya’s lips with a lip liner just beyond the her natural lip line, and then filled in with deep lip colour. Result: Hot lips. (Another trend we had written about!)

Hair: Done in long braids/ plaits, then wound around in an updo. Curls near the crown and temples.

Which of these makeup tips are you going to try?

Though based in current times, the Guzaarish trailer reflects director Sanjay Leela Bhansali’s old-world inclinations. He’s brought in history wherever possible: there’s a lots of old Goa, ornate and carved wooden furniture, even a vintage car, and of course, Aishwarya Rai Bachchan’s costumes.

Designed by Sabyasachi, Aishwarya’s clothes are understated, yet rich, typical of the Bengali designer.

We bring you some highlights from Aishwarya’s wardrobe, as seen in the Guzaarish stills. (So you know what to look out for during the movie, since Hrithik won’t be dancing much).

What do you think of Aishwarya’s look in Guzaarish?

Akshay Kumar and Aishwarya Rai Bachchan-starrer Action Replayy hits theatres today. The movie is based in the 1970s, and the film’s designer Manish Malhotra (who else?) has pulled all stops to give each cast member an authentic 1970s look.

But we remember the seventies, don’t we? How many of you think the clothes in the movie resemble those of the 1970s? See the pictures and vote!

Meanwhile, check out what Akshay Kumar wore to Lakme Fashion Week in September to promote his film. We understand you wanted to look like you’re from the 1970s, but what’s with the polo neck on a hot day? And check out Rannvijay’s yellow shirt with black waistcoat. Doesn’t suit him at all.

Manish Malhotra’s couture bridal collection for HDIL India Couture Week comes soon after his LFW collection, and this time with a much-talked-about showstopper.

Manish went festive with plenty of colours: white to flame red, maroon, wine and jade green. He sexed up the collection with tiny cholis and cutaway backs, teamed with tiered or panelled lehengas, and velvet and brocade borders. Like his LFW collection, he often used shaded net for saris, with zardosi and crystal embellishments. Oh, and he favours kalidar kurtas.

Didn’t think much of this corset-fit blouse.

What do you think of Manish Malhotra’s showstopping outfit for Aishwarya? Tell us!