After years of being discarded as “too casual”, denim emerged as one of the key trends from the international Spring Summer 2010 catwalks. From Dolce & Gabbana to Jean Paul Gaultier, this fabric appeared from out of the blue in a variety of garments, other than jeans. There were edgy jumpsuits, hot shorts, mini skirts and casual dresses. Soon enough, denim hit the high fashion street, with Mango and Zara giving their summer collections a denim twist.

But if you don’t want to wear a denim dress, you’ve anyways worn jeans all your life, and we don’t need denim jackets in India (thank you very much), cash in on the trend with denim shoes!

Footwear made of denim can be surprisingly versatile. They can be sneakers, pumps or wedges. How do you want to wear it?

How to wear the trend

If you’re looking for dressy, sexy or stylish to go with jeans or a non-denim dress, then look out for the denim shoes at the high street stores. Mango has this chic pair of denim shoes at their Indian stores. I also liked this pair for guys, but Indian men are not too high on Mango’s radar.

Meanwhile, check out this really cute pair of denim lace-ups I found at a Mango store abroad.

If you’re sportier types, head to the nearest Converse store. This American and Indian teen (and post-teen) favourite is likely to have a pair or two of denim shoes on their shelves. Casual, smart and comfy.

What do you think of this trend? Are you waiting for lunch hour to rush to the nearest store? Or have you had enough of denim already? Tell us!

My late night TV viewing is usually limited to the 5764th rerun of Friends, unless an episode of I’m too Sexy for my Shoes is playing on NDTV Good Times. The designer challenges, the latest style and fashion recommendations and fashion explorations are too much fun to watch. And the charismatic and leggy Ambika Anand is the perfect host, teamed up with the stylish Mohan Neelakantan.

Turns out that the new season of the show kicks off February 12 and with it a series of on-ground events that complement the channel’s brand. The first event, themed “Sexy Shoes”, is a grand party to be held in Delhi. Other than the great food and dance and other standard fare, the party’s style quotient will get a fashionable boost with Salvatore Ferragamo, Just Cavalli, and Canali showcasing their Spring Summer 2010 look.

For all fans of the channel (including me), this new initiative seems to be a great way to enjoy our passion for food, fashion, gadgets and luxury. When, where and how of the events have not been revealed yet, but my ears are close to the ground already.

Now if only we could get an invite to the Sexy Shoes party!

UPDATE: Turns out I can get an invite after all, so can you! Participate in the Sexy Shoes contest and you could win an invite for the party! 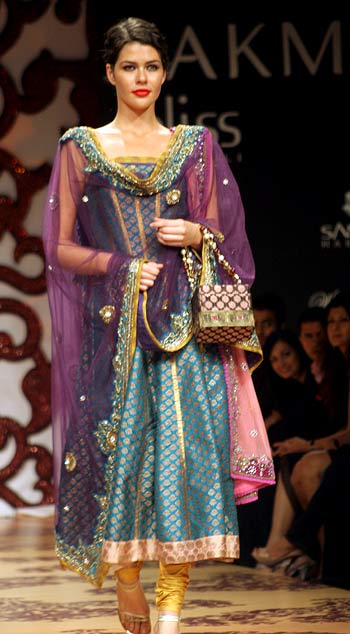