When Sean Penn’s interview with (then fugitive) Mexican drug lord El Chapo Guzmán (or just “El Chapo”) was made public, it was sensational news around the world. Accompanying the news was a picture of El Chapo shaking Sean Penn’s hand, wearing a printed blue shirt. And then, El Chapo’s shirt was suddenly in demand. But who designed that shirt? And where is it from? This feature from El Pais (a Spanish newspaper) has the answers. Don’t just read it to know about the brand and the designer—think about the bigger picture here. It’s a fascinating story that began with religious persecution, then immigration, and is truly symbolic of globalization, international trade and the fascinating times we live in. It left me amazed (and amused!). 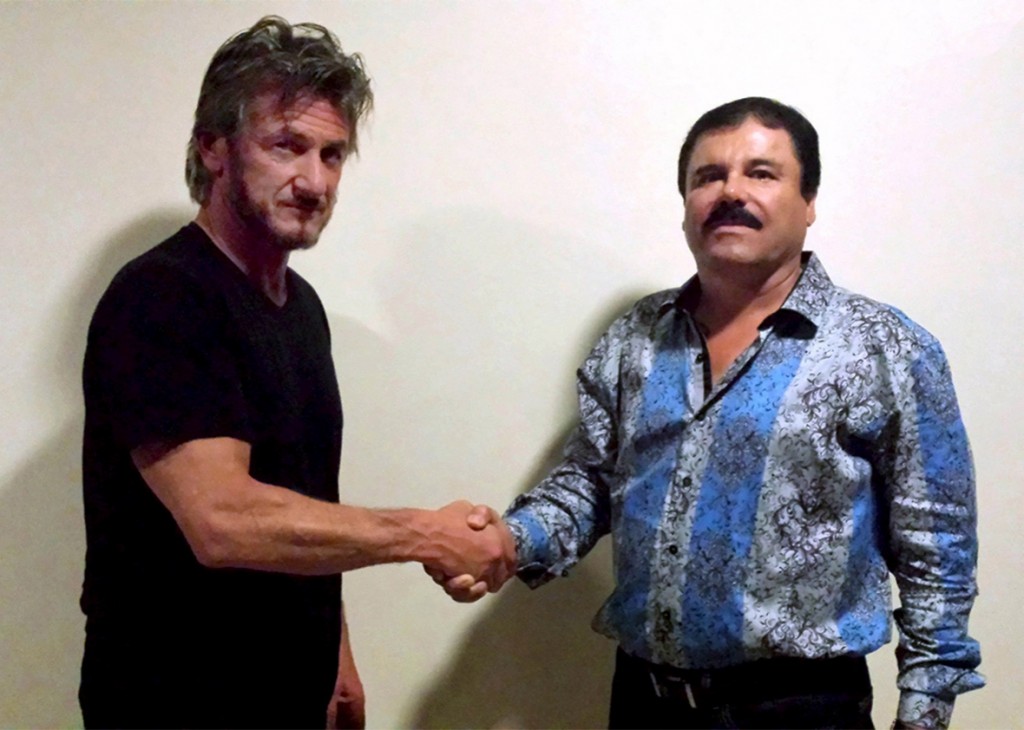 I’ve translated important sections of the feature from Spanish (without help from Google Translate). Read on for an enlightening story about the famous “narco” shirt:

Last Saturday, while thousands of people were looking at a photo of actor Sean Penn and El Chapo Guzmán and wondering where it was shot, what they discussed or who took the photo, Sam Esteghball was focused on something else: the shirt that El Chapo was wearing was his. That is to say, the design. Esteghball is the owner of the shop Barabas in Los Angeles, and he had been inundated with emails from customers who had recognised the print and it seemed like they wanted to buy it.

Since then, orders have flooded this family business that creates its own designs and manufactures in China. “We have thousands of requests that we cannot fulfill [yet], but we are manufacturing more,” says Sam Esteghball in the store. They placed an order for a few hundreds of the shirts, like they do with all their designs, to sell them through exhibitions and to see how they do in the market. They did not imagine instant success.

Right now they are sold out, but Sam assures that he’s been requested [the shirts] for exhibition sales. If one makes an online request, rest assured, the shirts will be here in two weeks. On the internet, there are two shirts El Chapo was wearing- one in the photo, the second in the video.

At the entrance of the store the shirt from the photo with Sean Penn is clearly displayed, light blue with darker vertical bands and twig motifs, 100% cotton. It costs $128 in stores, a price that is cheap for this fashion line, according to Esteghball, who assures that it hasn’t risen this week. Sam defines the line’s style as “fantasy”, but the Mexicans know it as “norteño” [Mexican street gang] or “narco” [drugs]. Not exactly. The correct word in Los Angeles for that style is flamboyant. Flashy, ostentatious, garish, that calls for attention. That description is flawless.

Barabas is a small store in the well-known “fashion district” in Los Angeles, a euphemism that conceals a sea of warehouses and alleys where clothing business by most of the world and for the world is negotiated. In September 2014, the FBI confirmed that it was the epicenter of drug money laundering.

Photos of famous people posing in their clothes adorn the walls of the Barabas store in the city centre (there are two locations). You can assume right away that they have special success in the world of Mexican street gangs: Goyo Gastelum, Andrés Márquez El Macizo, La Banda Jerez, Jorge Gamboa, Javier Rosas y El Komander pose with their designs leaving from the store.

“That culture came to us, not the other way round,” assures Esteghball. He started the business with his brother nine years ago and it was around two years ago, he says, that he realized that the “narco culture” world had adopted his shirts, bright pants and safari jackets like those of his brand. They began to be copied by some of the others, he says. One enters Barabas and can leave dressed like El Komander in 10 minutes. They sell clothes to 5000 retailers around the world, which is why Sam says he had no idea where El Chapo bought his shirt, one of the richest men in the world, who could choose Armani, visible from Barabas.

The five members of the Esteghball family migrated to California 16 years ago from Shiraz, Iran. They are Jewish and the situation had become very difficult for minorities during the regime of the ayatollahs. Around a million Iranians live in Los Angeles- it’s the largest exile community of Iran in the world, to the point that there is an area called Teheángeles. The sons got into the fashion business because it was what their father did in Shiraz. El Chapo wears narco shirts designed by Iranian immigrants and made in China. That’s what the Republican candidates don’t notice.