And what look was he [Marty McFly] wearing in the year 2015? Jeans (they never get old!), an auto-dry and auto-adjustable jacket, a cap—in the words of the Doctor, what all kids wear, and the jewel of the crown: the Nike [shoes] without laces that adjust to your feet. Important detail to note: the pockets in Back to the Future are worn externally.

I don’t think jeans will ever fade from human history—they will be continuously reimagined with different fabrics, cuts and washes.

Nike didn’t want to waste this product placement and announced much later that the shoes from Back to the Future would go on sale… In 2011 they made a first attempt. Attempt, I say, because it didn’t get great reception despite its great promotion. The complaint of the fans? That the shoes don’t auto-adjust to your feet like in the Zemeckis film. Nike backed down, and has promised that in 2015 it will release definitive Nikes with superior technology in a limited edition. Dear Nike managers, that time is upon us, and it’s October 21, 2015.

Great idea for brand promotion, Nike. But please be realistic and honest with fans. Are such shoes technically possible in the forseeable future? Do tell.

The women from Back to the Future II paint their eyes in geometric shapes and silver tones, which doesn’t deviate much from the looks in these images:

Something that they couldn’t have depicted better is humans’ obsession with technology… In Back to the Future [they make it with their] futuristic glasses—see the attempt by Google Glasses below – but the Apple Watch could also be adapted. 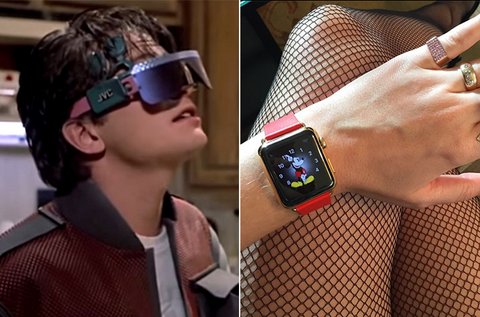 Oh yeah, a watch that can check email, glasses that can capture images or search for a keyword… who knows what’s next in wearables?

The excerpts have been translated from the Spanish.