I went to watch Chef this weekend with the hubby, and we both loved it! While the hubby felt hungry merely looking at the food in the movie (despite our pre-movie meal), I stared at the screen admiring Chef Carl Casper’s expertise and his untiring cooking sessions. 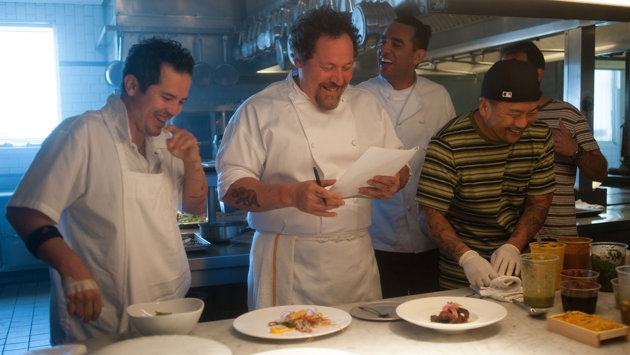 Right from the movie’s opening shots, when Jon Favreau (as Chef Carl Casper) expertly crushes a garlic with a bare fist, to the closing scene in which all’s-well-that-ends-well, Chef is a delightful watch. If you’re a foodie / food lover / food blogger / amateur cook / newbie cook or similar, you will  enjoy Chef. And even more if you’re none of the above. Here’s why:

You feel the passion: Right through the movie, I could feel the chef’s innate passion for food. It wasn’t forced, but seemed to be was part of his life that came through really well. For instance, when Carl made a sandwich for his son, I gawked. The bread had to be the perfect golden brown, and the cheese had to be melted just so- Carl made sure it was the perfect cheese sandwich.

There’s real food: The dishes in Chef aren’t all gourmet or dishes with unpronounceable names. Cuban sandwiches (aka medianoches) are a star in the movie, so are beignets (had never heard of them before!) and yuca fries (hadn’t heard of them either!). They are snacks popular on the West Coast and New Orleans (as I learnt from the movie).

Twitter plays a cameo!: The movie may seem to be an extended advertisement for Twitter, but I’m not complaining! There’s also Vine, and a viral video that make Chef Carl Casper a famous (infamous?) man. And to add to this social media mix, there’s a food blogger too.

It’s got a dash of humour: There were some genuinely funny cooking jokes which all would enjoy. Like the joke after the boys sprinkle cornstarch in their underpants to beat the heat. (Yeah, really! :-P)

A pinch of spice: There are ups and downs, fights and drama, jokes and laughs. And to top it all, there are a few surprise elements. Like the sudden appearance of a comedian (no spoilers here).

Great food styling: I’m vegetarian, so I may have wrinkled my nose when I saw them slicing up a pig or a piece of barbecued steak. But the food looked heavenly, irrespective of the meat content. The way these bread is crisped or the castor sugar is sprinkled was mouth-watering. And it made me appreciate my own cooking!

Simplicity: A tasty home-made dish is usually about simple flavours and fuss-free cooking. The movie Chef has the right dose of simplicity– in the story, the characters, and production values.

You could be Chef: Not really, but Chef could be anybody’s story- a frustrated professional, a stifled artist, a harrowed father, an employee looking for a career change, someone going through a middle age crisis, or someone trying to chase their passion. At some levels, almost all of us will identify with Carl Casper. So sit back, take a bucket of carb and sugar-laden popcorn (as Chef Carl would say), and enjoy!