Sonam Kapoor- the fashionista. Sonam Kapoor- the willingly typecast actor? In both her new releases (Raanjhanaa and Bhaag Milkha Bhaag), the young actor is seen in similar desi girl styles, although from different eras. Even so, it would be tough to pinpoint an outfit from a specific movie. 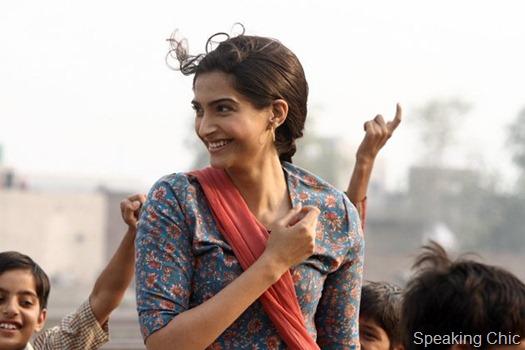 Sonam Kapoor is the typical small-town girl in the movies- demure and tongue-tied in the 1950s-based Bhaag Milkha Bhaag; and educated and confident in the present day Raanjhanaa.

Here’s my take on Sonam’s looks from both the movies.

Sonam Kapoor as Zoya in Raanjhanaa 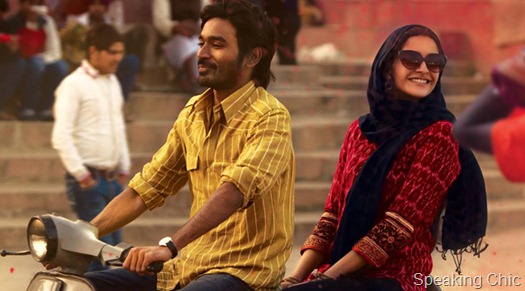 In this movie set in Varanasi and Delhi, Sonam Kapoor starts off as a pretty school girl (Zoya) who evolves into a shrewd college graduate with a political inclination.

Sonam’s clothes in Raanjhanaa feature deep Indian earthy colours that blend well into Varanasi’s crowded markets. She’s mostly wearing cotton kurtas with contemporary prints, that include paisleys and geometric Indian designs. These prints are quite commonly spotted in Indian stores, and are perfect for the girl-next-door that Sonam plays.

The kurtas have a border with a hint of embellishment or detailing (like gold thread work), and her outfit is completed with a contrasting dupatta. Sonam’s accessories are mostly jhumkas of various colours, shapes and sizes, carefully paired with her ensembles. As a look, Zoya’s style is easy to achieve and imitate if you’ve got the right mix of kurtas (available everywhere) and jhumkas (those too). 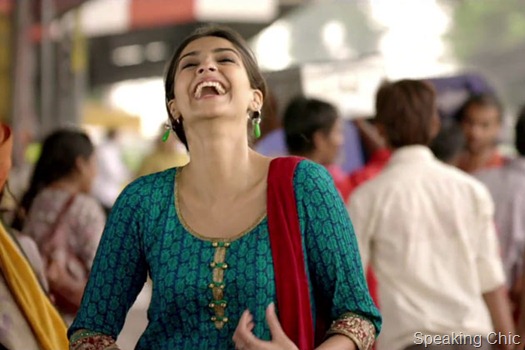 BTW, I’ve noticed recently that most actors playing young women from small-town India are spotted in colourful kurtas and jhumkas (example: Kangana Ranaut in Tanu Weds Manu). Are there no other accessories available to these girls?

In Bhaag Milkha Bhaag, Sonam Kapoor’s Biro is a typical 1950s girl. Living in not-so-dandy conditions near the railway tracks, she steps out to fill water from the community tap every morning. Her Punjabi attire is a super-short kurta, and, surprise surprise(!) a patiala salwar. And there’s a contrast dupatta again, with her red chunnari playing a somewhat significant role in Milkha Singh’s life and memories. 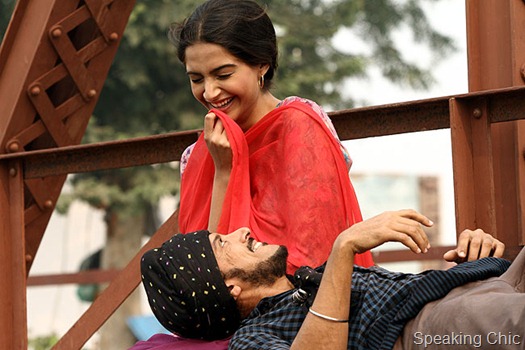 I’m not sure if this is what young Punjabi women wore in the Fifties, but if they did I hope they know the short kurta-patiala combo wasn’t really flattering. The extra wide patiala salwars and voluminous gathers that Sonam wore aren’t exactly meant for well-built Punjabi women. But the mismatched print combinations and floral prints were just right– portraying Sonam as a lower middle class girl who has little time or inclination to do matchy-matchy to make it in time for the tap water. Her rustic appearance is kinda rustic with unstyled hair and plain kada and balis (so no makeup, and almost no accessories). 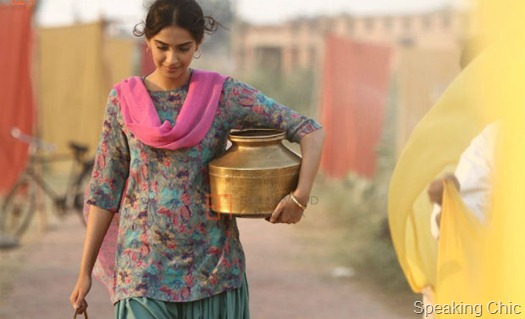 It won’t be a good idea to try aping Sonam Kapoor’s Bhaag Milkha Bhaag look, as you would most likely come across as a behenji in 21st century India. Milkha Singh’s legend may live on, but the fashions from his era most certainly don’t!