I saw Ishaqzaade (starring Parineeti Chopra and Arjun Kapoor) recently, and was quite impressed with the delicacy shown to the costumes of the heroine Zoya. The costume designer (Varsha-Shilpa) and director’s (Habib Faisal) attention to detail is astounding, as everything Zoya wears, carries or drives defines her personality in a unique way. For instance, she drives an open jeep with confidence, fires a gun with brashness, and talks on her iPhone. 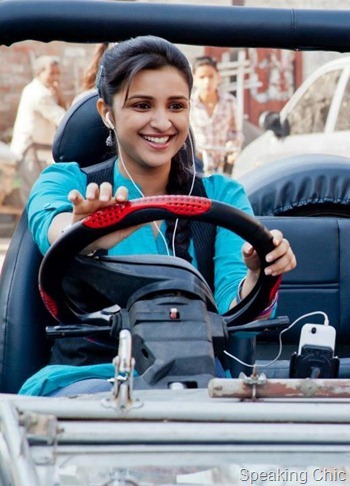 Every element of Zoya’s wardrobe represented an important aspect of her personality and the urgency of the situation. Here’s a look at what stood out the most from Zoya’s wardrobe (and her character).

Zoya has no qualms about “borrowing” and altering her father’s black waistcoats for herself. As the darling of the family, she gets away with her gender-bending wardrobe. 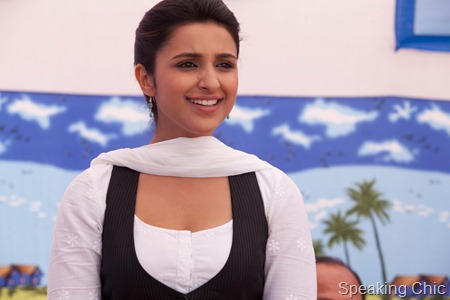 Simple cotton kurtas and tunics with skinny jeans and churidars define Zoya’s basic style statement. The silhouettes are straight-cut and easy to wear. So no kalidar kurtas, embellishments or heavy prints. The detailing is limited to block prints, chikan work and pleats.

When was the last time you noticed shoes in a movie? In Ishaqzaade, you most certainly do, because Zoya doesn’t wear pretty heels or sandals. Instead, she wears floaters as she campaigns for her father. Yes, floaters! And when she’s on the run, she’s in casual canvas shoes. No heels, bows or buckles.

She’s a girl ready for action. 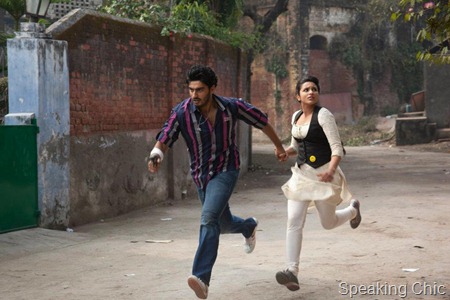 In her introductory scene, Zoya is seen checking out guns for herself. She finally selects one and pays for it with gold jhumkas! Now how many girls would barter jewellery they’re supposed to wear to a grand party for a gun?

Zoya’s pink sharara paired with a blue dupatta is the outfit that marks important turning points in the movie (and her life). Both times she wears this pretty outfit are happy occasions become tragic milestones. Quite obviously, she opts to wear the outfit for her secret wedding ceremony, because it’s perhaps the only one of its kind that she has. And when tragedy struck after her wedding, I couldn’t help but feel that the outfit was an ill omen for the girl.

Who would think that a pretty outfit like that would spell the beginning of doom? 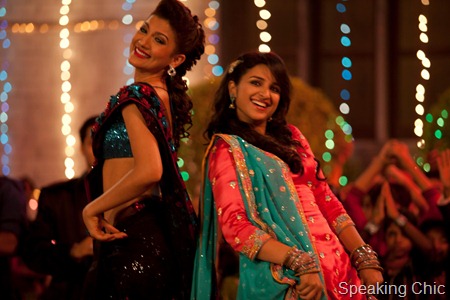 What did you think of Parineeti Chopra’s costumes in Ishaqzaade?